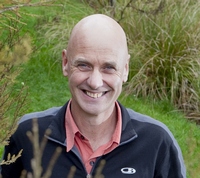 Professor David Norton (School of Forestry, University of Canterbury), represents the Canterbury Branch, Royal Society of New Zealand, on the Riccarton Bush Board of Trustees. He was appointed in May 2016 for a 5-year term. He has worked at the University since 1985 and has been extensively involved with Riccarton Bush, using it for teaching in ecology and conservation since the early 1990s, and contributed a chapter to the 1995 Riccarton Bush: Putaringamotu book edited by Brian Molloy. He is actively involved in research on integrating biodiversity conservation in agricultural systems, restoration ecology, threatened plant conservation and conservation management planning.